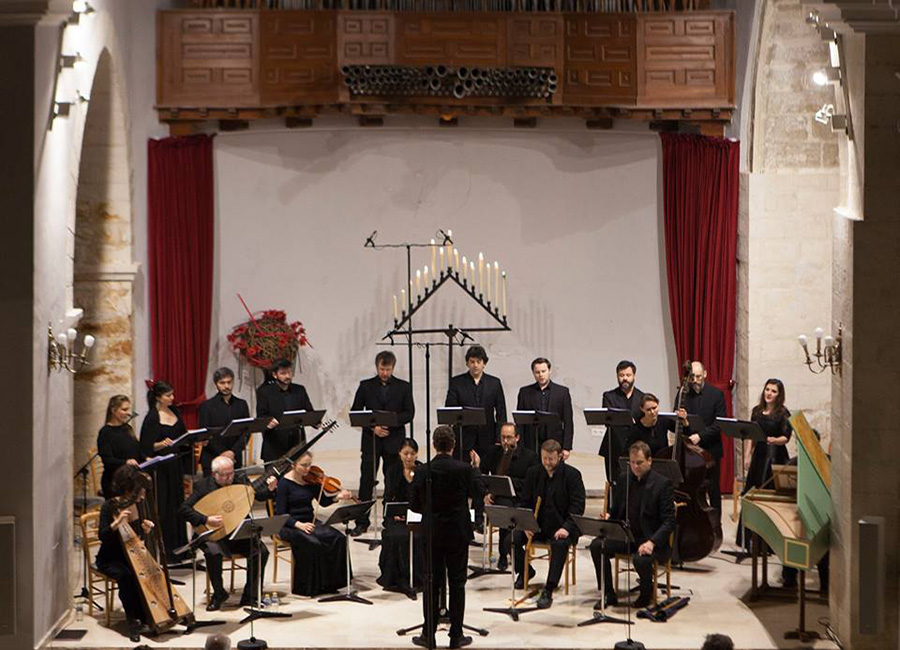 La Grande Chapelle is a vocal and instrumental early music ensemble with a European outlook whose main objective is to apply new readings to the great vocal works of the 16th to 18th centuries with special emphasis on the polychoral productions of the Baroque period. At the same time it aims to contribute to the urgent task of reviving forgotten works from the Spanish musical repertoire.

Upon its foundation in 2005, fired by a desire to spread Spain’s musical heritage, La Grande Chapelle set up its own independent record label, Lauda, which specialises in recordings of great musical and musicological interest. It has focused on two principal areas: an exploration of the relationship between the music and literature of the Spanish Golden Age and the revival of works by the most outstanding Spanish renaissance and baroque composers through first-time recordings, particularly those that set a particular work or composer within a specific context.

In 2010 La Grande Chapelle received the inaugural FestClásica (the Spanish Classical Music Association Awards) Prize for its contribution to the performance and recovery of previously unrecorded Spanish music. Recordings by La Grande Chapelle on the Lauda label have received several prestigious national and international awards and prizes for their quality and artistic rigour, including two “Orphées d’Or” (Académie du Disque Lyrique, Paris, in 2007 and 2009), “Label of the Year” in the “Prelude Classical Music Awards 2007” (The Netherlands), “5 of Diapason”, “Excepcional” in the magazine Scherzo, “Choc de Classica”, “Preis der deutschen Schallplattenkritik” (PdSK) – and the “Editor’s Choice” and “Critic’s Choice” in the celebrated British magazine Gramophone.

Upon finishing his music studies in Tarragona, Barcelona, Bruges and Ghent he took a degree in musicology at the Catholic University of Louvain where he graduated with a doctorate on 18th century stage music in Madrid. Since the beginning of his career he has combined performance, management and musicological research with the conviction that an interdisciplinary approach and total commitment are necessary for the promotion of forgotten musical heritage. He has published musicological studies in various journals and encyclopaedias, both nationally and abroad, and has been involved in different research projects (UAM, UB). His musical recovery project “Pedro Ruimonte in Brussels” was a beneficiary of a BBVA Awards Foundation grant for Researchers and Cultural Creators in 2016.

In 2005 he began an ambitious project for the recovery of forgotten or overlooked Spanish music with the founding of La Grande Chapelle and the Lauda record label. This brought to light unreleased works from some of the great composers of the 17th and 18th centuries (A. Lobo, J. P. Pujol, C. Patiño, J. Hidalgo, C. Galán, J. García de Salazar, F. Valls, J. de Nebra, A. Rodríguez de Hita, F. J. García Fajer, J. Lidón, etc.) in the form of premieres or first-time recordings.
In 2007 he took over the reins as artistic director of La Grande Chapelle. Since then he has conducted numerous concerts of both polyphony and baroque music. Outstanding among the modern-day premieres of theatre music are the auto sacramental Universal Peace by Calderón de la Barca (with Juan Sanz and Ana Yepes), Ramón Garay’s opera A Concise Compendium of the Spanish Revolution (1815) and the Fortunes of Andromeda and Perseus (1653) by Calderón and Hidalgo (atrib.).

He remains absolutely committed to releasing music on the Lauda label which gathers together the research carried out for La Grande Chapelle’s musical recoveries.

Since September 2019 he is Creativity and Cultural Heritage researcher at the Institute for Culture and Society (ICS) of the University of Navarre.

Although the corpus of madrigals conserved in Spain is smaller than that produced in Italy, the Spanish composers were not oblivious to the emergence of the new Italian poetry. These compositions seldom appear with the denomination “madrigal” and are also not always polyphonic. For this reason, one of the most interesting oeuvres of the 16th century is that of Francisco Guerrero, the celebrated composer from Seville. Some of his profane works were widely disseminated and were copied in collections of vocal music, such as the Cancionero de Medinaceli (second half of the 16th century), or they were arranged for voice and vihuela (Alonso de Mudarra’s Tres libros de música; Miguel de Fuenllana’s Orphenica lyra; Esteban Daza’s El Parnaso, etc.). Encouraged by poet Cristóbal Mosquera de Figueroa (1547-1610) and by other friends in the arts and letters academies of Seville, at the end of his life Guerrero decided to publish the collection Canciones y villanescas espirituales (Venice, 1589) “because as they were passed from hand to hand, with time they were losing the authenticity of their composition, and nothing but the composer’s name was left of them” (from the Prologue). In the madrigals –compiled here from these various sources– Guerrero deploys a wide variety of musical techniques in the service of textual expression, a reflection of the prevailing humanist ideas. 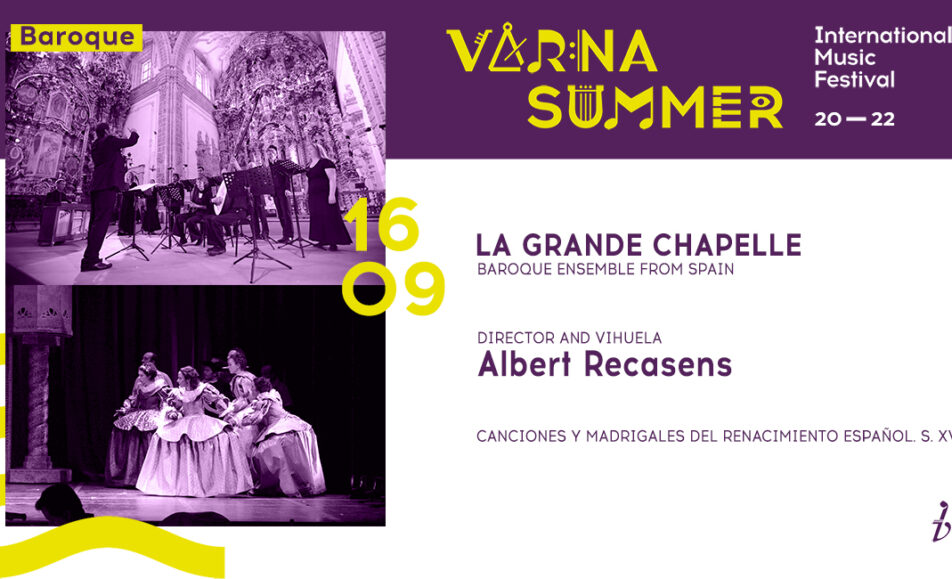 La Grande Chapelle
La Grande Chapelle, Baroque Ensemble from Spain Director Albert Recasens Canciones y madrigales del Renacimiento español. S. XVI This concert was supported by a grant from Acción Cultural Española (AC/E) The International Music Festival “Varna Summer“ provides a unique opportunity to the...
You must agree to our Privacy Policy and use of cookies, in order to make full use of the website! SETTINGS✓ AGREE
Privacy & Cookies Policy