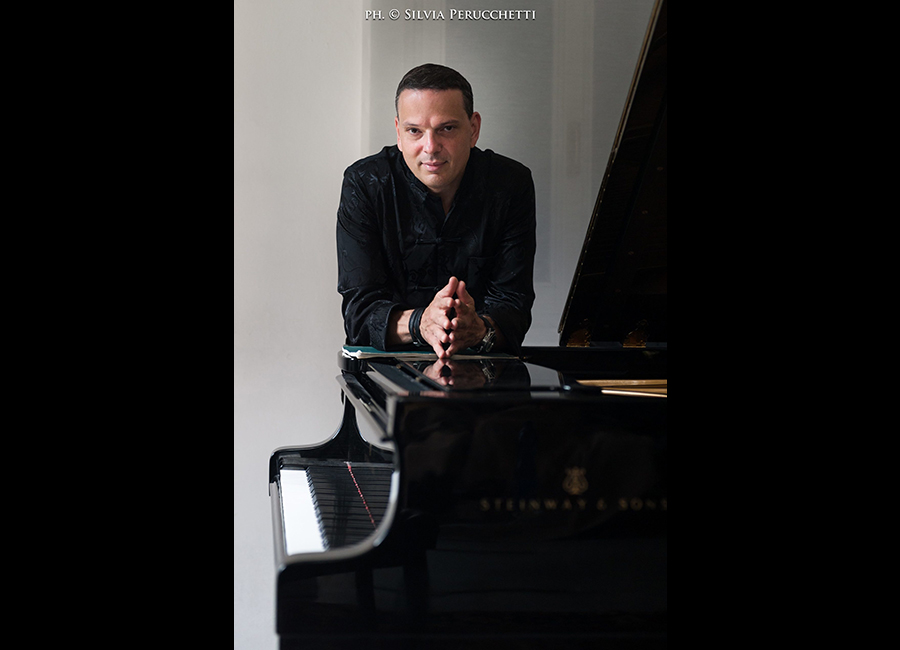 Born in Reggio Emilia. He attended the Imola Academy, perfecting himself for four years from 1992 to 1996 with concert performers and teachers such as L. Berman, A. Lonquich, J. Achucarro, L. Lortie, R. Risaliti, F. Scala, P. Rattalino and participating in master classes of some of the greatest musicians of our times (S. Richter, M. Pollini, A. Schiff etc.).

He usually plays as a soloist with important groups such as Salzburg Orchester Solisten, Ensemble Berlin – Berliner Philahrmoniker, Camerata RCO Royal Concertgebouw Orchestra, Wiener Konzert-Verein, Savaria National Symphonic Orchestra, Brasov Philharmonic, I Virtuosi Italiani, Italian Philharmonic Soloists, Marchigiana Philharmonic Orchestra etc ..
For more than two years Marcello Mazzoni has been on tour together with actor Peppe Servillo, Tommaso Lonquich, Mirco Ghirardini and Silvia Mazzon with “Histoire du Soldat” by Igor Strawinsky, now represented in some of the most important Italian theaters (Belluno, Taranto, Gibellina , Naples, Bari, Recanati, Foggia, Rome, Milan, Catania, Pistoia etc.).
Between 2016 and 2017 Marcello Mazzoni had a consistent record production for Limen Music: in July 2016 he recorded Mozart’s piano quartets with the Camerata RCO Royal Concertgebouw Orchestra, in March 2017 he recorded the Brahms Sonatas with Silvia Mazzon, while in July 2108 he recorded a solo cd dedicated to music by Franz Liszt. In 2020 he will record Brahms quartets and quintet always for the Limen Music record company, together with Ilya Grubert, G. Brinkmeier, S. Mazzon and A. Niculescu with whom he formed a stable group.

On 28 October 2018 Marcello Mazzoni made his debut at the legendary Musikverein at the Brahms Saal in Vienna playing with the Wiener Konzert-Verein as a soloist under the direction of the very young but already internationally established Giedre Šlekytė .

Also worth mentioning is the participation in the project for the execution of the integral of Bach’s keyboard and string concertos in collaboration with Andrea Padova, Maurizio Baglini, Gianluca Luisi and Marco Scolastra and the Italian Philharmonic Soloists. This second project started from Italy (Amiata Piano Festival, Osimo Festival, Amici della Musica di Foligno) to arrive in Hong Kong in one of the most important Asian halls (the Hong Kong City Hall) with the Hong Kong and China Sinfonietta. From this round of concerts the last recording effort was born in May 2019, or the complete Bach concerts for the prestigious Decca record label. Also in 2019 the Bachiano project will continue with the performance of the keyboard and orchestra concertos in collaboration with the pianists Luisi, Guaitoli, Miodini, Padua and the Italian Philharmonic Soloists and will touch several Italian cities and prestigious festivals to give life to a second double cd. In March 2018 Mazzoni participated, performing the Mendelssohn double concert with Bronzi and the Salzburg Orchester Solisten, in a tour that saw several Italian stages and which will end in the summer of 2019 at the Wiener Mozart Saal in Salzburg.
On 13 September 2019 he performed Franz Liszt’s Totentanz with the Chinese National Orchestra (Sichuan National orchestra) in Chengdu (China).

On 10 October 2019 he made his debut with the Braşov Filarmónica in the 2nd Chopin Concerto at the Sala Patria in Braşov. From this concert a live video will be made for the BAM record company.

In January 2020 Mazzoni participated, performing the Concerto n.1, in the realization of the Liszt project (complete of the works for piano and orchestra of the great Hungarian composer) which culminated in the tour that touched some important cities and seasons (Brasov Filarmonia, Modena Teatro Comunale , Reggio, Emilia Cavallerizza, Foligno Auditorium San Domenico), obtaining an extraordinary success with the public.

From September 2013 he joined the renowned family of Steinway artists alongside myths such as Vladimir Horowitz, Martha Argerich and Maurizio Pollini.

Marcello Mazzoni is principal piano teacher at the “A. Peri “and at the A. Buzzolla Conservatory in Adria, he has been a member of the CDI of the Valli Theater since 2011, is the artistic director of the” Incontro alla Musica “season which has been held at the Auditorium Cavallerizza in Reggio Emilia since 2014, has been artistic director since 2017 of the Accademia del Mauriziano (historic home of the poet Ariosto) and is also the organizer and creator of the “Festival of Italian Pianists” which has been held since 2013 in the same city at the Chiostri di San Pietro and which has registered a growing success with the public.