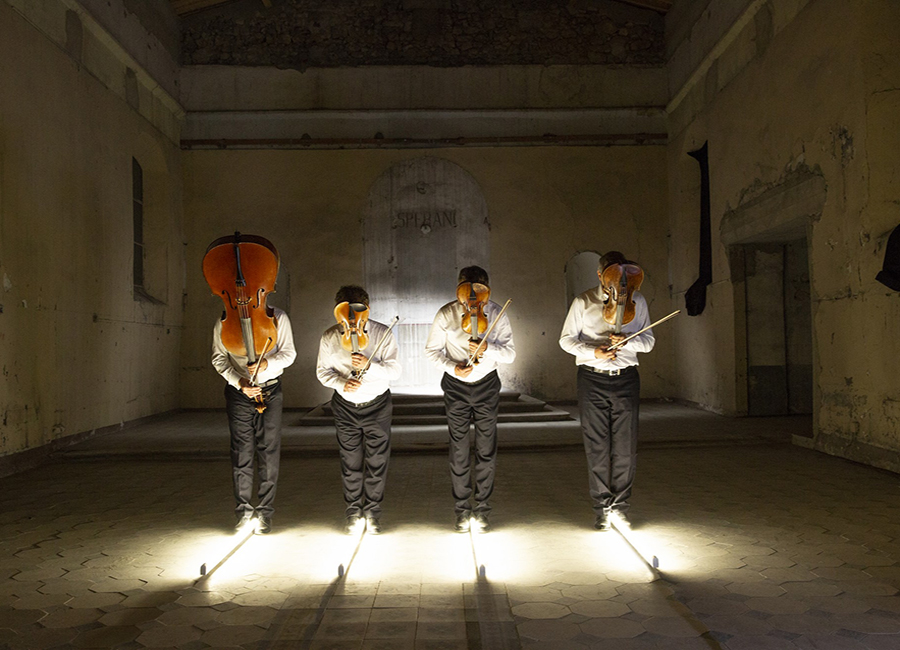 THIRTY YEARS OF MUSIC EVERYWHERE, FOR EVERYONE AND FOR EVERY MOMENT
In thirty years of activity, the Debussy String Quartet has been acclaimed throughout the world, continually sharing the same passion in its musical interpretations on the world’s most prestigious stages: Japan, China, United States, Canada, Australia, Russia, Europe, gaining renown through regular tours on all the continents. Thirty years of evolution which have made the Quartet a key player on the international music scene, with numerous awards, including a First Prize in the Evian International String Quartet Competition in 1993 and a Victoire de la musique 1996 (« Best Chamber Music Group”). Today, the professional recognition of the Debussy String Quartet is indisputable.

A DESIRE TO BE WHERE THEY ARE LEAST EXPECTED
Driven by values of sharing and a renewal of artistic forms, the Debussy String Quartet strives to surprise and arouse the curiosity of all audiences and of all professionals of their field. By creating bridges with different artistic fields such as dance (Maguy Marin, Anne Teresa De Keersmaeker, Wayne Mac Gregor, Mourad Merzouki…), theater (Philippe Delaigue, Richard Brunel, Jean Lacornerie…) or even modern music (Yael Naim, Gabriel Kahane, Cocoon, Franck Tortiller, Keren Ann…) and circus (Cie Circa), the Debussy Quartet above all defends a strong, open, and lively vision of « classical » music. Recognized by their peers for the wide variety of their repertoire and their strong taste for artistic encounters, the members of the Quartet have recently continued to pursue original collaborations in the digital arts (David Gauchard) and slam (Mehdi Krüger).

VALUES AND FUNDAMENTAL KNOWLEDGE TO BE SHARED
Having chosen from the beginning to focus on exchange and transmission, the Debussy Quartet also holds educational workshops for children and engages in outreach projects for various audiences (the elderly, prisoners, the sick, etc.). Their open concerts and workshops with the public allow the musicians of the Quartet to share their passion for the music of yesterday and today with everyone. From the beginning of their adventure in 1990, the musicians of the Debussy Quartet have been committed to transmitting the knowledge they received from the great masters to young quartets; as instructors in their specialized degree program at the Conservatory in Lyon since 2011, in frequent workshops, and during their Summer Academy each July, which is part of the Cordes en ballade chamber music festival they founded in 1999 in France’s Ardèche region.

MORE THAN THIRTY RECORDINGS
Having recorded all of the Shostakovich quartets, the Quartet continued to regularly enrich its collection, notably in French music (Bonnal, Caplet, Debussy, Onslow, Ravel, Fauré, Witkowski, Lekeu) and through its explorations and artistic encounters: collaborations with Olivier Mellano, Yael Naim, Jules Matton, Keren Ann, two albums of nursery rhymes for children with Philippe Roussel, the transcription of Mozart’s piano concertos, including their version of Mozart’s famous « Requiem » for string quartet (Decca – Universal Music France). The numerous new recording projects by the Debussy String Quartet include the first recording on the Evidence Classics label, with a project devoted to the ‘Feminine Heroines’ of Schubert and Janacek, and in recent years a recording dedicated to the works of American composer Marc Mellits. Vocalist Keren Ann has also joined them to sign a limited-edition vinyl record. The Quartet has recently recorded several times alongside renowned artists in the jazz world (Jacky Terrasson, Vincent Peirani, Franck Tortiller, Jean-Philippe Collard-Neven …) for Radio France, and for Harmonia Mundi with their critically acclaimed recording in tribute to composer Claude Debussy. The soundtracks of their shows Boxe Boxe, Opus and the new Boxe Boxe Brasil are also now available.