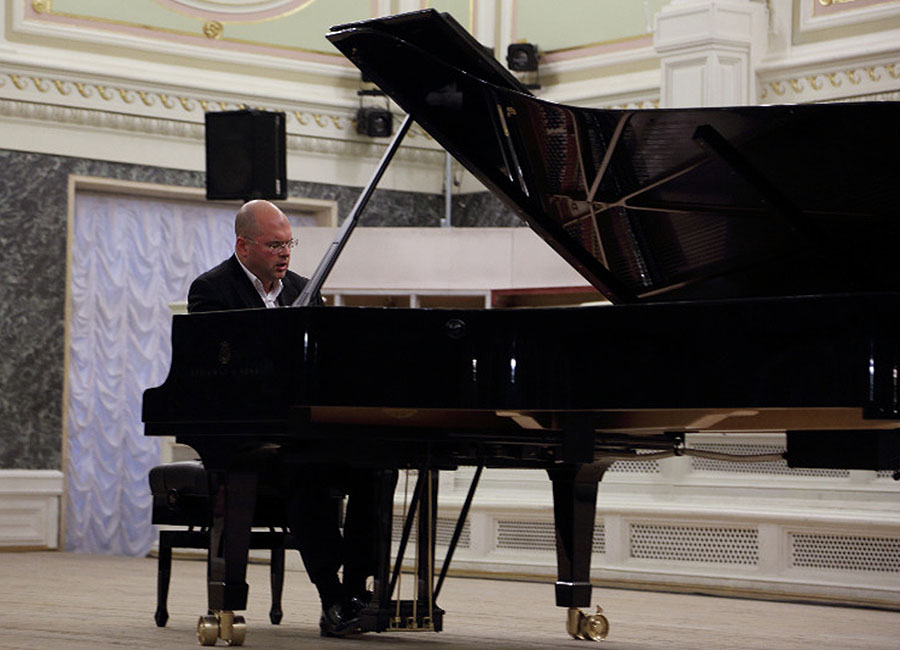 Internationally celebrated as both a soloist and conductor, Florian Krumpöck has more than proven his outstanding capability in the international concert scene. Appointed as one of the youngest music directors in German history in 2011, Krumpöck characteristically masters a broad variety of opera and concert literature as well as a wide piano repertoire, and particularly enthralls his audiences with his double role as a soloist and as a conductor.

The son of a cellist and an art historian, Krumpöck can count Rudolf Buchbinder and Gerhard Oppitz among his teachers, as well as one of the most distinguished female pianists of our time, Elisabeth Leonskaja. Pronounced by none other than Daniel Barenboim after hearing him play as being a “simply wonderful pianist,” Florian Krumpöck was well on the way to a promising international career.

Receiving outstanding reviews for his debut in the Zurich Tonhalle with the Moscow Radio Symphony Orchestra under Vladimir Fedoseyev, Krumpöck was subsequently invited to play at other major European music centers such as Vienna, Salzburg, Munich, Zurich, and Moscow as well as further afield in Israel, the USA, China, and South Korea. Critically acclaimed solo recitals at international festivals such as the Salzburg Festival, the Salzburg Easter Festival, the Bregenz Festival, the Bad Kissingen Summer Music Festival, the Bachfest in Leipzig, the Mecklenburg-Vorpommern Music Festival and the Vienna Klangbogen, all helped to cement his future career as a soloist.

Furthermore, at an early stage Sir Peter Ustinov had presented the young musician to a wider audience. Florian Krumpöck makes regular appearances as a soloist at renowned concert halls such as Vienna’s Musikverein and Konzerthaus, the Zurich Tonhalle, the Herkulessaal in Munich, and the Meistersingerhalle in Nürnberg. Other appearances include the famed concert hall of the Moscow Conservatory. In the course of his career, he has played several complete cycles of Beethoven’s 32 Piano Sonatas.
Upon the advice of his mentor Daniel Barenboim, Krumpöck expanded his repertoire to include numerous symphonic works and operas and began to work increasingly on conducting.

UNIVERSAL was laid when he won critical acclaim at the Klassik am Dom Gala in July 2015, with soloists Angelika Kirchschlager and Michael Schade conducting the Linz Bruckner Orchestra. He has formed a close working relationship with Angelika Kirchschlager, the two of whom perform many Lieder recitals together. In June 2018, Florian Krumpöck conducted the open-air concert Klassik am Dom in Linz for the second time, this time with soloist Juan Diego Florez.

In April of 2018, Florian Krumpöck was awarded the honor of becoming a “Bösendorfer” artist. On this occasion the Bösendorfer company provided him with a life-time gift of an Imperial grand concert piano, specially adjusted for him. Since then, Florian Krumpöck has featured this instrument in all his concerts and recordings.

Since the 2018/19 season, Florian Krumpöck has also worked closely with the Théâtre du Capitole in Toulouse: in October 2018 he conducted the ballet production Dans les pas de Noureev, which was also performed in Montpellier with the Opéra Orchestre National de Montpellier and the Ballett du Capitole in January 2019. Since Summer 2015, Florian Krumpöck has been the artistic director of Kultur.Sommer.Semmering.