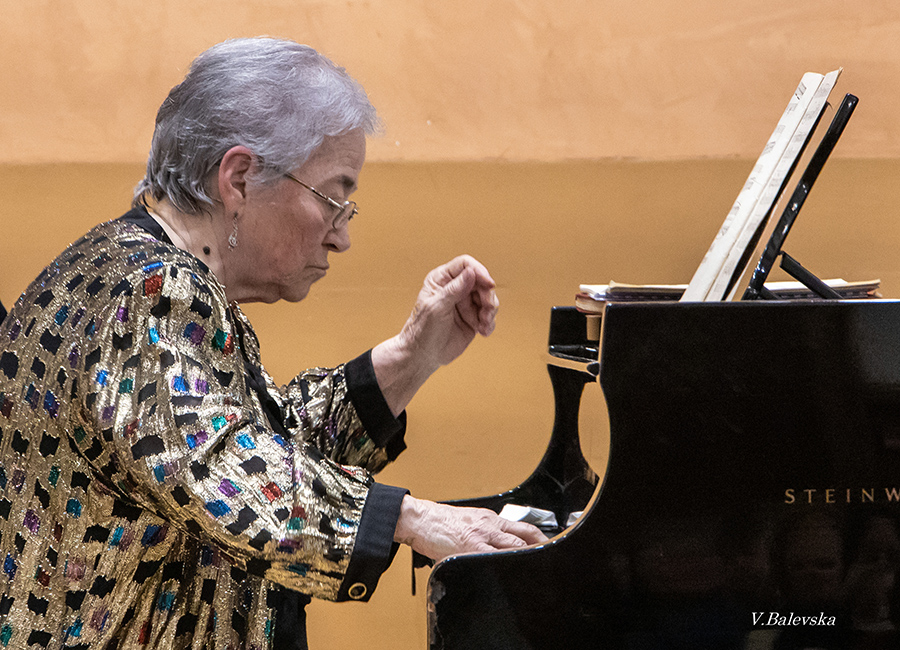 Milena Mollova is one of Bulgaria’s most prominent pianists. A winner of both the Tchaikovsky (Moscow) and Beethoven (Vienna) International Piano Competitions. A child prodigy, she began piano lessons under the tutelage of Bulgaria’s most prominent pianist, Dimitar Nenov, and later with Panka Pelishek. Upon graduating, she continued her studies at the Tchaikovsky Moscow State Conservatory with Emil Gillels.

From that point onwards, her performing career has been an endless chain of awards, of guest performances and conquering of new artistic peaks, relevant to her original goals as an artist. She has numerous appearances in prestigious international competitions:
– First International Tchaikovsky Competition in Moscow.
– Marguerite Long–Jacques Thibaud Competition in Paris.
– Internationaler Musikwettbewerb der ARD in Munchen.
– Ludwig van Beethoven International Piano Competition, Vienna.
– First All-Bulgarian Contest in Sofia

Her repertoire is impressive, including different styles and epochs and covering wide range of solo and chamber works. She has worked in partnership with all Bulgarian symphony orchestras under the batons of the greatest Bulgarian conductors, as well as of international celebrities such as Kiril Kondrashin, Kazuyoshi Akiyama, Rudolf Baumgartner, Georges Tzipine.

Milena Mollova has been very successful in concerts in Bulgaria, Germany, Italy, Belgium, Switzerland, Denmark, the Czech Republic, Slovakia, Poland, Russia, Japan, Cuba etc. during her over 68-years life on the stage. She has made recordings for the Bulgarian National Radio and Television and for the Balkanton and Melodia recording companies as well as for many TV and Broadcast companies in Europe.

Her undisputed achievements include her integral performances of 32 piano sonatas and the violin-and-piano sonatas by Beethoven presented in a series of concerts – a daunting artistic undertaking that few performing artists have ever dared to tackle. It has been on many occasions that Milena Mollova had managed an integral performance of Beethoven’s sonatas for violin and piano, the last one with Mario Hossen. Alongside her interpretation of the classical repertoire, she takes the challenge of the first performance of new works by contemporary Bulgarian composers as Dimiter Christoff, Krassimir Kyurkchiisky, Gheorghi Arnaoudov, as well as by such from USA and other European countries.

Her substantial experience as a performer forms the basis of her intensive teacher’s career. Professor Milena Mollova is the Head of the Department of Music at New Bulgarian University, she also teaches at the Pancho Vladigerov National Academy of Music, and the Northern Greece Conservatoire in Thessaloniki. She has given masterclasses in Germany, Italy, Switzerland, Turkey, Bulgaria, South Korea and USA, and has been invited to sit on jury panels for major international competitions.

Prof. Milena Mollova’s skills as a performer, teacher and organiser of events are mutually complementary, helping her to bring her teaching and performing projects up to such a perfection as to reflect her enormous experience while outlining the far-teaching horizons of her ability and ambition.